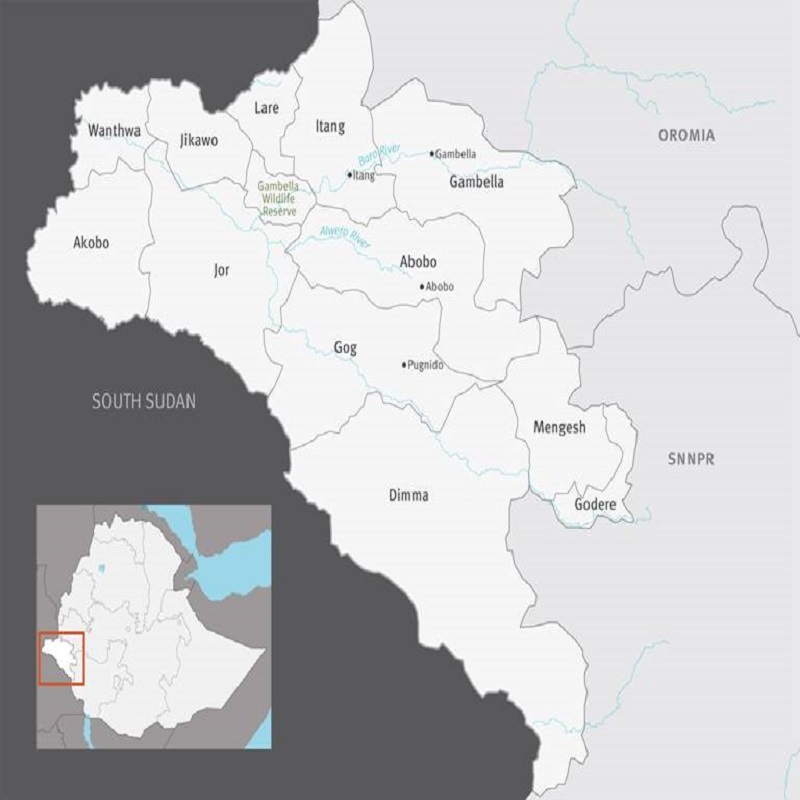 Gambella is one of the nine ethnic divisions (kililoch) of Ethiopia. Previously known as Region 12, its capital is Gambella.

Situated in the western tip of Ethiopia bordering with Sudan in the West, South and North. It Size is 25,802.01 square kilometers with estimated population of over 247,000 inhabitants. The main nationalities of the region are: Anyuak, Nur, Mezhenger, komo and Opo. Moreover, the other ethnic groups predominantly from high land of Ethiopia live in the region. Lying between the Baro and Akobo Rivers, the western part of Gambella includes the Baro salient. Located in Gambela is Gambella National Park, which covers approximately 5061 square kilometers or 19.6% of the Region's territory.

The CSA reported that for 2004-2005 3,734 tons of coffee were produced in Gambella, based on inspection records from the Ethiopian Coffee and Tea authority. This represents 1.64% of the total production in Ethiopia. The CSA could not provide livestock estimates for Gambella.In a 26 May 2000 report, the FAO observed that at the time Trypanosomiasis was a major problem in cattle for this Region. There was an epidemic of this disease in the area during 1970. Gambella is believed to have major oil resources. In June 2003, the Ethiopian government signed an agreement with Petronas of Malaysia for the joint exploration and development of oil resources in Gambella region. Petronas then awarded a contract for seismic data acquisition to China’s Zhongyuan Petroleum Exploration Bureau (ZPEB) October of that year. The Water and Mines Resources Development Bureau of Gambella announced that it was initiating a program that would drill 13 new manually-operated wells, 54 new deep water wells, and develop four springs. This would provide access to drinking water for 26,000 inhabitants, increasing coverage for the state to 42 percent from the existing 27 percent, at a cost of 6 million Birr.

Here are the quick facts:

The GPLM was founded in 1979 and was based in the Anuak ethnic group.This group launched a guerrilla war against both the Derg regime of Ethiopia and the Sudan People's Liberation Army (SPLA). The latter had a major base in Gambella and had committed numerous atrocities against the local inhabitants; however the GPLM was unable to mobilize more than a negligible portion of the population and never held any liberated area before the fall of the Derg in 1991. With the end of the Ethiopian Civil War, Ethiopian People's Revolutionary Democratic Front (EPRDF) forces, accompanied by a small contingent of the GPLM, occupied Gambella and expelled the SPLA. Now in power, the GPLM removed the predominantly Nuer leadership that had dominated the province under the Derg, as well as settling old scores with its ethnic rival. In response, the Nuer organized the Gambela People's Democratic Unity Party (GPDUP), which was immediately recognised by the EPRDF. Despite the GPLM's hold on power it was weakened by internal disputes, predominantly between Anuak from villages along the Openo (or Baro River), who known as "the Openo boys", and those from villages along the Gilo River. The first group, including Regional President Okello Oman, were expelled from the GPLM before the 1995 General Election. In response to this situation, the EPRDF ordered the remaining members of the GPLM and the GPDUP to merge into the GPDF in 1998.

Presidents of the Executive Committee

Woredas of the Gambela Region and Zones

Like other Regions in Ethiopia, Gambella is subdivided into three zones, 13 woredas and 1 special woreda.