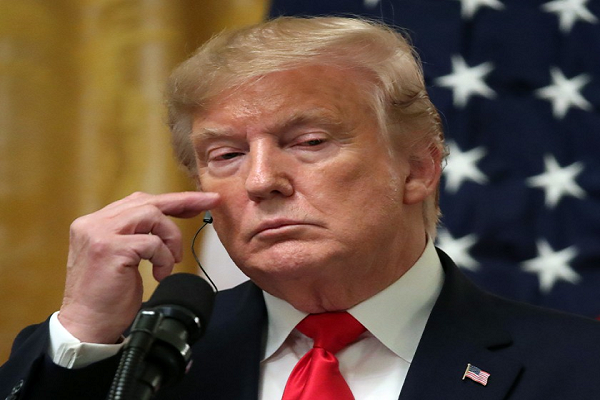 March 09, 2020 (GSN) - A few weeks after U.S. President Donald Trump told a campaign rally that he deserved a Nobel Peace Prize for “saving” Ethiopia from potential war with Egypt, the dispute between the two countries has slid back into a dangerous deadlock again.

Mr. Trump has taken a personal interest in the conflict over a massive Ethiopian hydro dam on the Blue Nile that could reduce the water supply to Sudan and Egypt but his diplomatic efforts have failed to ease the escalating conflict.

The intense U.S. role in the Nile negotiations has sparked concerns from some analysts that Mr. Trump is throwing his weight behind Egypt in the dispute. A former U.S. ambassador to Ethiopia, David Shinn, says the United States “seems to be putting its thumb on the scale in favor of Egypt.”

Last week, after a breakdown in the U.S.-mediated talks between the two countries, Mr. Trump telephoned Egyptian President Abdel Fattah al-Sisi and “expressed hope that an agreement on the Grand Ethiopian Renaissance Dam would be finalized soon,” according to a White House statement.

Egyptian reports said Mr. Trump praised Mr. al-Sisi for signing a draft agreement on the hydro dam at the latest round of negotiations in late February in Washington, where the agreement was scheduled to be finalized. But Ethiopia refused to attend the talks and later complained that the U.S. statement on the draft agreement was “totally unacceptable” and “highly partisan.” The United States has denied the accusation of bias.

Ethiopia has vowed to push ahead with the US$4.5-billion dam project, which has been under construction for nearly a decade. It still intends to begin filling the dam’s reservoir in July, even though this could trigger a deeper conflict with Egypt.

In the past, Cairo has threatened to bomb the hydro dam and launch a war with Ethiopia if the dam reduces the supply of water in the Nile River, which is the source of 90 percent of Egypt’s water and is crucial to Egyptian agriculture. The Blue Nile, which originates in Ethiopia, is the main source of the Nile’s waters, and Egypt sees the dam as an existential threat.

Ethiopia has responded by saying it is willing to go to war if necessary. “No force could stop Ethiopia from building a dam,” Ethiopian Prime Minister Abiy Ahmed told the country’s parliament last October. “If there is a need to go to war, we could get millions readied.”

Ethiopia sees the hydro dam as essential to its economy – it is intended to provide electricity for the entire country and generate revenue from power exports. It would become one of the biggest hydro projects in the world when it is completed by 2022.

African countries had been mediating the dispute over the dam for several years, until Washington stepped in to take over the talks between Egypt, Sudan and Ethiopia last year.

After the failure of the February meeting, a U.S. statement warned Ethiopia not to begin filling the dam’s reservoir until a final agreement is reached.

Ethiopia’s Foreign Minister, Gedu Andargachew, criticized the U.S. statement as “undiplomatic.” But he said Ethiopia would continue to take part in the negotiations.

Mr. Shinn, who is now an adjunct professor of international affairs at George Washington University, said it was surprising that Mr. Trump had assigned the Blue Nile dispute to his Treasury Secretary, Steven Mnuchin, instead of leaving it to the U.S. State Department, which has more expertise in such disputes. He was commenting on the dispute on his personal blog.

Another analyst, Addisu Lashitew of the Brookings Institution, said the U.S.-led draft agreement could carry “unintended future risks” because it is the product of a “rushed” negotiation and lacks any agreed mechanism for monitoring and enforcement.

Mr. Mnuchin, speaking to a Congressional committee last week, said he was “incredibly disappointed” that Ethiopia had refused to sign the draft agreement.

Under a treaty supervised by the British in 1929, the Nile waters were to be divided between Egypt and Sudan. But Ethiopia, rejecting the treaty as a vestige of the colonial era, began construction of the dam in 2011 without seeking Egypt’s approval.

In a statement last week, Egypt accused Ethiopia of deliberately hindering the U.S.-led negotiations by avoiding the late February session.

On Thursday, the Arab League voiced its support for Egypt’s position, warning Ethiopia not to begin filling the reservoir.

But the war of words continued the weekend. Ethiopia said it rejected the Arab League statement, and Egypt complained that the Ethiopian statement was “an unacceptable affront to the Arab League and its member states.”